After the rage, disbelief and gossip...


Day 2 after the article in Mumbai Mirror was published about the teenagers who crossed all boundaries of decent behaviour!


Its time for schools and parents to start working together instead of working against each other. After all  is our future that is at stake here.
Dr. Swati Popat Vats
Parenting Mentor.
Posted by Dr. Swati Popat Vats at 20:22 1 comment: 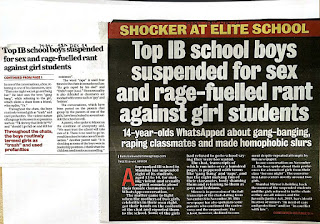 Mumbai city woke up today to a shocking story about how 11 to 14 year old boys were sending messages on whatsapp that were sexually derogatory against the girls in their class. I came to know about the story quite early when my whatsapp starting buzzing with messages from educators, who asked, “which school?” Shame on us for wanting to know which school, rather than wanting to understand what is going wrong with our children and us as a society!

As a sociology student we had a subject called Women and Society and the history of women in society was about being considered a property through whom the lineage of any culture or society would grow and progress. So it was the woman who was exchanged for territory, money, power and it was the woman who was raped when you wanted to show your power over a particular community or people or adulterate the lineage of any community or sect. Disgusting, but go through the history of rape and this is what is common in ancient communities around the world.

The solution is not so easy and will have to begin first in the family, with the parents.

In the case of these 11 and 14 year olds, they are not inventing this kind of language! They have definitely heard either their parents or other adults talk derogatorily about women and sex. Or they have seen content that taught them that women and girls are just for sex and you can hurt them with sex. It is a sign of dominant ideology of patriarchy that is clear in their behaviour and that does not come from your genes, it is learnt and imitated behaviour gone unchecked and uncorrected for a very long time. If these boys had been taught to respect and if respect was given the highest priority in their behaviour they would have never ever broken the ‘taught’ boundary of respect.  Its time not only to counsel them but their parents too.

It’s also time to make children understand about consequences and that again will be easier to teach from childhood. It is part of impulse control and self-regulation, and needs to be an integral part of our upbringing and education of children.

Its time for parents and schools to regularly check the ‘mental’ content of children to understand if the content these young brains carry is age and developmentally appropriate and if not then to take immediate counselling action to ensure that we sensitise and sanitise their brains about sex, sexual behaviour and gender respect.
Dr. Swati Popat Vats
Parenting mentor